Sterile Water Injections for Back Labour

While the injections help relieve the pain, they do not cause any numbness and the woman will be able to feel her labour as before.

The technique has been a matter of obstetric debate for decades. In 1975, obstetric pioneer Michel Odent wrote about a technique called lumbar reflexotherapy whereby intracutaneous injections of sterile water were made in the costomuscular angle. Thereafter, four Swedish studies concluded that intracutaneous water injections significantly reduced low back pain during labour. 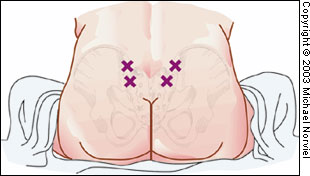 The woman is given four intracutaneous injections of 0.1ml sterile water at specific points in the lower back. The injections take effect

immediately, and are estimated to be around 93% effective, with benefits normally lasting a couple of hours. After that they can be repeated. Nobody is entirely sure how they work: it’s possible that they cause pressure on acupuncture points or that the stinging from the injections bloacks intense lower back pain.

However, these injections only work for back labour which is generally the result of the baby lying in the occiput posterior position and is notoriously painful. If you are in true back labour, these sterile water injections can dramatically speed things up as well as helping the baby to change position, thus reducing the incidence of emergency c-section.

Unfortunately, there is a lack of scientific study into the use of sterile water injects, and in hospitals a mother would be more routinely encouraged to use more traditional pain relief options such as pethidine or an epidural. Due to the fact that there isn’t a huge amount of money to be made out of sterile water injections, there is no interest from those who fund research either.

The main downside to the injections is that they are painful, and are best administered during a contraction. When given between contractions they can be very unpleasant and some mothers report the discomfort being worse than the contraction.

When used appropriately, the injections can offer instantaneous relief. However, in the event that they don’t work, then nothing has been lost as there are no other side effects.

Fill a small syringe (25 gauge) with sterile water (not normal saline). Identify the posterior superior iliac spines and mark them with a pen. Approximately 3 to 4 cm down and 1 to 2 cm in, identify the other two points and mark them. It is not critical to be exact when locating these points. The area being injected is over the sacroiliac joints.

During a contraction, inject a small amount (0.1ml) of sterile water into the skin raising a small bleb (blister), as in a tuberculin skin test. Repeat at the other three sites as quickly as possible. During the injections, the woman will feel a sharp stinging pain similar to a wasp sting. The stinging will fade in 10 to 15 seconds and, as the stinging pain fades, the back pain disappears. The relief lasts for between 60-90 minutes and can be repeated. It is best to avoid back massage in this area following the injections.

Sterile water is easily obtained from any pharmacy.